I normally don’t talk about apps and other toys that we all play with on a daily basis, but I couldn’t resist not talking about Sirius XM’s recently released iPhone app. The anticipated release of their app has certainly dissipated as iPhoners and subscribers are realizing that though it’s a free app, there is an additional $3/month fee to access their ‘premium’ online radio content.

For those, like myself, who already subscribe to their service, we’re scratching our heads as to why Sirius XM is actually making customers who want to use the iPhone app pay an additional fee on top of their monthly costs. In my eyes, they totally missed the mark – not only with their pricing strategy but also in respect to their customers. Don’t take my word for it, take a look at the 2-stars given by 35,752 ratings and some of the 3,936 customer reviews: 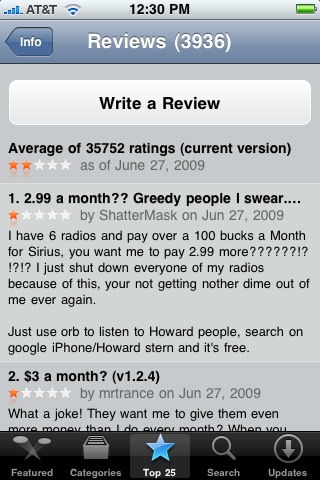 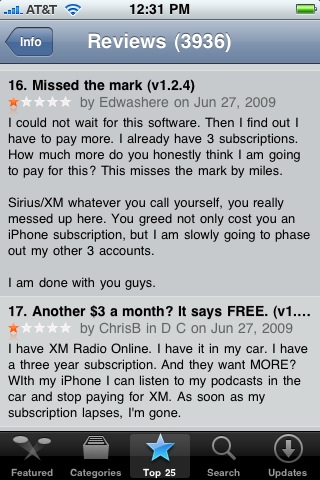 I went through a good amount of the reviews and a hefty majority share the above users’ sentiments about the app. Customers are lashing out at the company, labeling them as greedy and threatening to cancel their service, while a couple users above have done so already.

Look, I understand that they want to monetize their app and service, as they’ve had a rocky road since the Sirius/XM merger, but why not charge for the app itself. Their customers would be much more open to that then an additional monthly charge tacked on.

Sirius XM could have taken advantage of the opportunity to reach out to their community of subscribers and ask them what they would want and expect from an iPhone radio app. But instead, they’ve alienated many of them and probably sent their iPhones sticking to radio app competitors, Pandora and Last.fm.

I’m curious as to how many customers have bought the additional ‘premium’ service to use the app, but I’m more concerned as to whether Sirius XM is listening to the community’s voice and if any action is going to be taken at a seemingly failed attempt in the iPhone app market.

What’s your take? Am I being too harsh on them or are we, as their customers, right in feeling slighted by having to pay more? I want to hear your side.

Are You Shortcutting Your Community?

8 comments On ‘Sirius’-ly Off The Mark