A couple weeks ago, I wrote on how to pre-tackle conferences and specifically related it to the MarketingProfs Digital Mixer that took place this past week. All I can say is – WOW. The event, people and venue were simply amazing. I expected a great event in Scottsdale as MarketingProfs had a stellar line up of speakers, as well as two big keynotes by Arianna Huffington and Gary Vaynerchuk, who undoubtedly ‘brought it.’ If you’ve ever watched one of his videos, you’ll notice his passion right off the bat for what he does and how much he truly believes in his community, which leads into the biggest takeaways for me from this event; people and passion. I’ll break this up into two parts so I can better explain both. 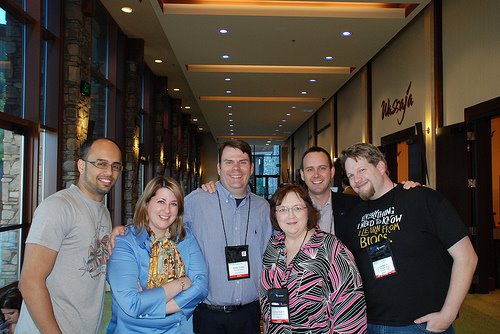 Networking and meeting people is always a big part of conferences but I honestly never expected to make the types of connections that I did this past week. Sure it’s probably a gimme that you’ll get to say hi to your favorite speaker or online influence while at the event, but I was lucky enough to actually spend time with them between & after events. I already had great online relationships with some of these people through Plurk and Twitter but meeting face to face further affirmed my thoughts about them.

This event really brought out the social aspect of social media. I never thought I’d spend my free time in Scottsdale hanging and joking with the very influencers I look up to and read on a daily basis. But in the end, I got what I put into it as I sought out to meet and connect with them as real people and not just business owners.

I look forward to further building these newly formed relationships and would like to personally thank again some of the people that made this event so great for me: Beth Harte, Frank Martin, Pam Martin, Amber Naslund, Ann Handley, Mack Collier, Connie Reece, Chris Brogan, Rohit Bhargava, Bryan Person, Christopher Penn and many others! And as David Alston would say (or do, as you see above), peace out. 🙂

Community For A Cause

22 comments On People and Passion – Part 1